Snowflakes as You’ve Never Seen Them Before

Sextillions of snowflakes fell from the sky this winter. That’s billions of trillions of them, now mostly melted away as spring approaches. Few people looked at them closely, one by one. Kenneth G. Libbrecht, a professor of physics at the California Institute of Technology, has spent a quarter-century trying to understand how such a simple substance — water — could freeze into a multitude of shapes. “How do snowflakes form?” Dr. Libbrecht said during an online talk on Feb. 23 that was hosted by the Bruce Museum in Greenwich, Conn. “And how do these structures appear — and just, as I like to say, literally out of thin air?” One of the people intrigued by Dr. Libbrecht’s snowflake research and photography was Nathan P. Myhrvold, a former chief technology officer at Microsoft who has since pursued projects in myriad scientific disciplines, including paleontology, cooking and astronomy. Dr. Myhrvold, an avid photographer, first met Dr. Libbrecht more than a decade ago, and in the spring of 2018, he decided he wanted to take pictures of the intricate frozen crystals himself. He recalled thinking, “Oh, we’ll just throw something together, and we’ll be ready for the winter.” 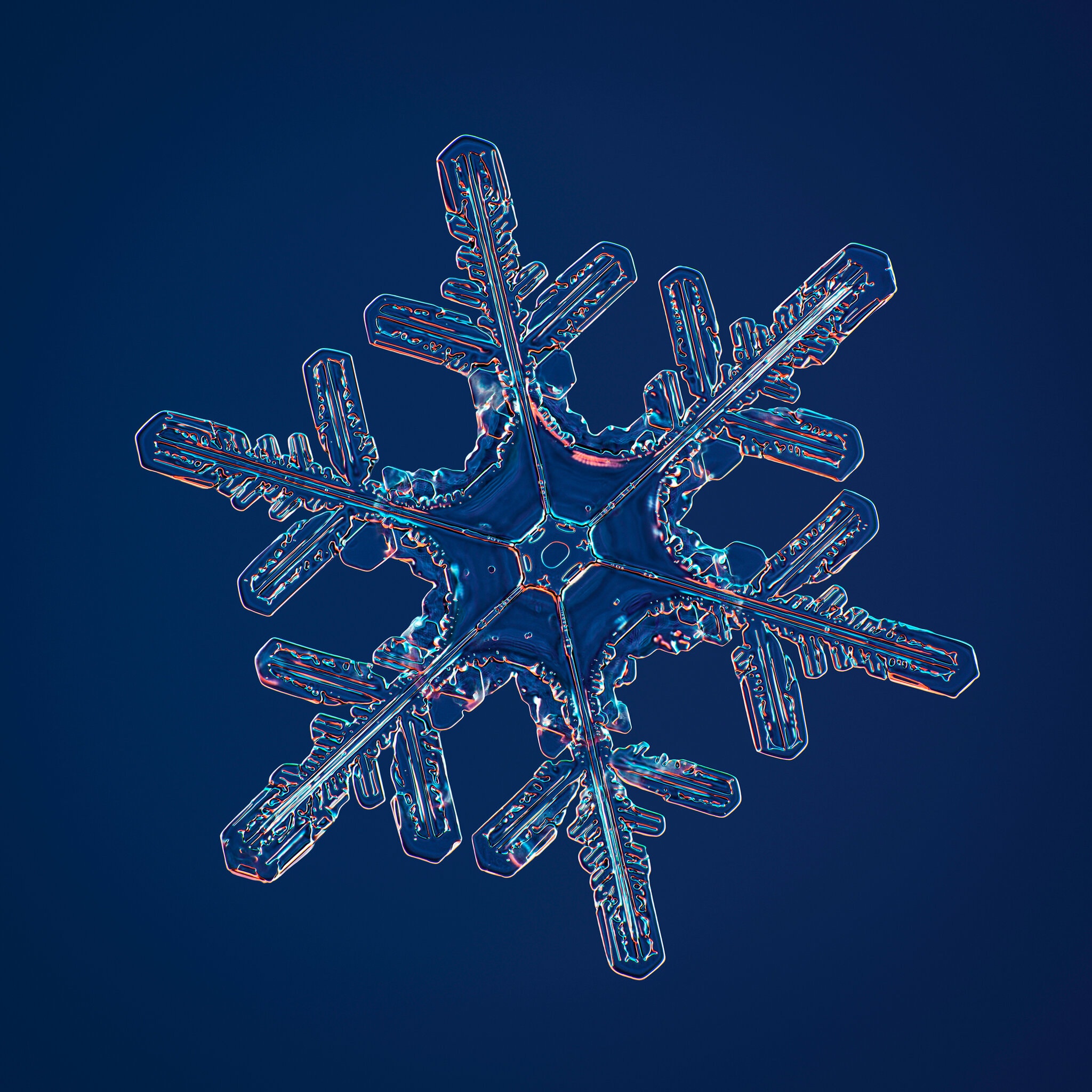 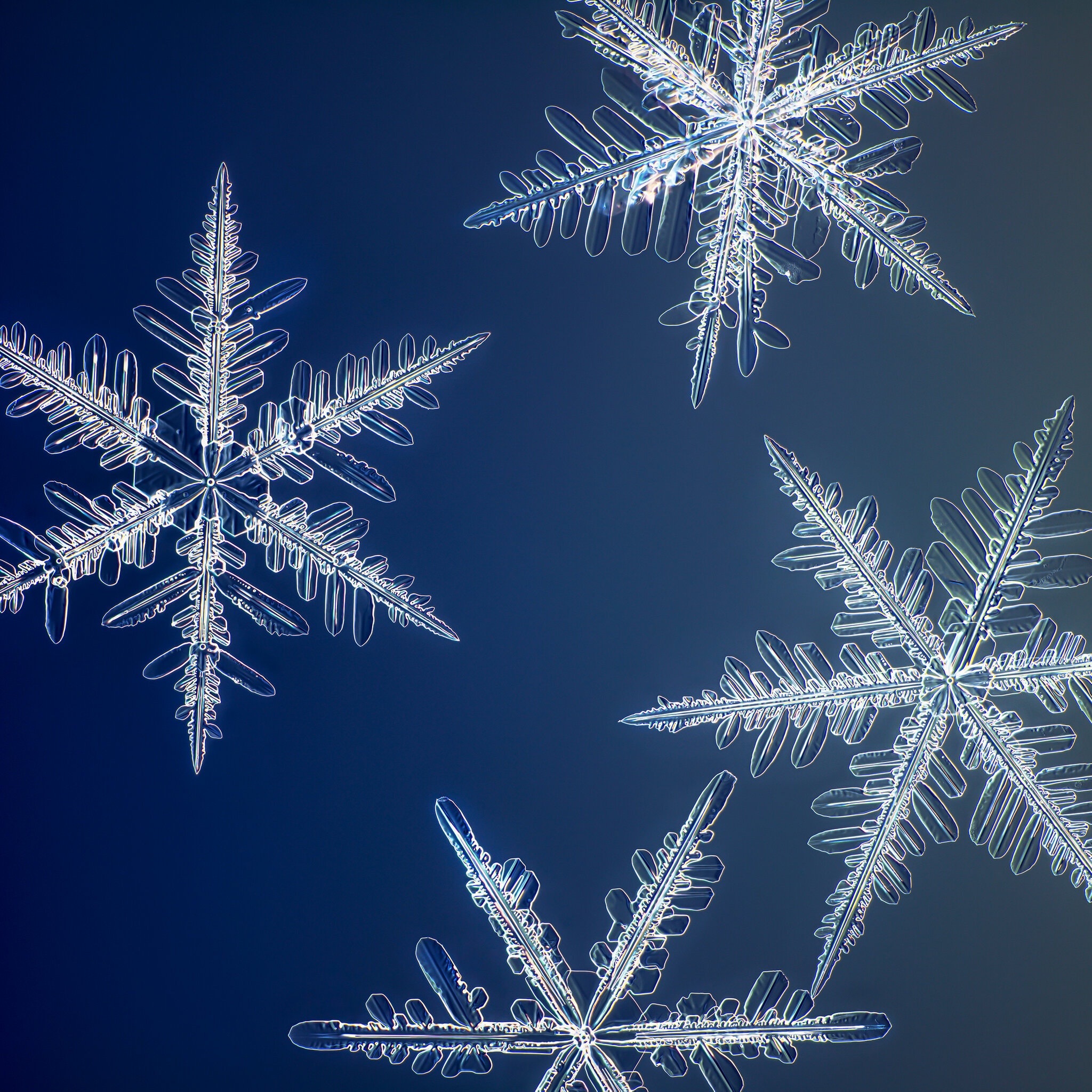 The “damn thing” was the camera system for photographing snowflakes. He wanted to use the best digital sensors, ones that captured a million pixels. “The real snowflake is very, very fragile,” he said. “It’s super intricate. So you want high resolution.” But that kind of sensor is much larger in area than the images generally produced by the lenses of microscopes, a result of decisions that microscope manufacturers made close to a century ago. That meant he needed to find a way to stretch the microscope image to fill the sensor. In his tinkering, “I came up with a custom optical path that will actually allow it to work,” he said. Then there is the housing for the optics. That is typically made of metal, but metal expands when warm and shrinks when cold. Moving the apparatus from the warm indoors to a frigid balcony where he would collect the snowflakes “would screw up the whole microscope,” Dr. Myhrvold said, making it impossible to keep everything in focus.

Instead of metal, he used carbon fiber, which does not appreciably expand or shrink. Dr. Myhrvold also found a special LED, manufactured by a company in Japan for industrial uses, that would emit bursts of light 1/1,000th as long as a typical camera flash. This minimizes heat emitted from the flash, which might melt the snowflake a bit. To look at something under a microscope, a specimen is typically placed on a glass slide. But glass retains heat. That also melts the snowflakes. So he switched from glass to sapphire, a material that cools more readily. By February 2020, he was ready. But where to find the most beautiful snowflakes to photograph? At first, he thought he could just head to a ski resort town — perhaps Aspen or Vail in Colorado or Whistler in British Columbia. 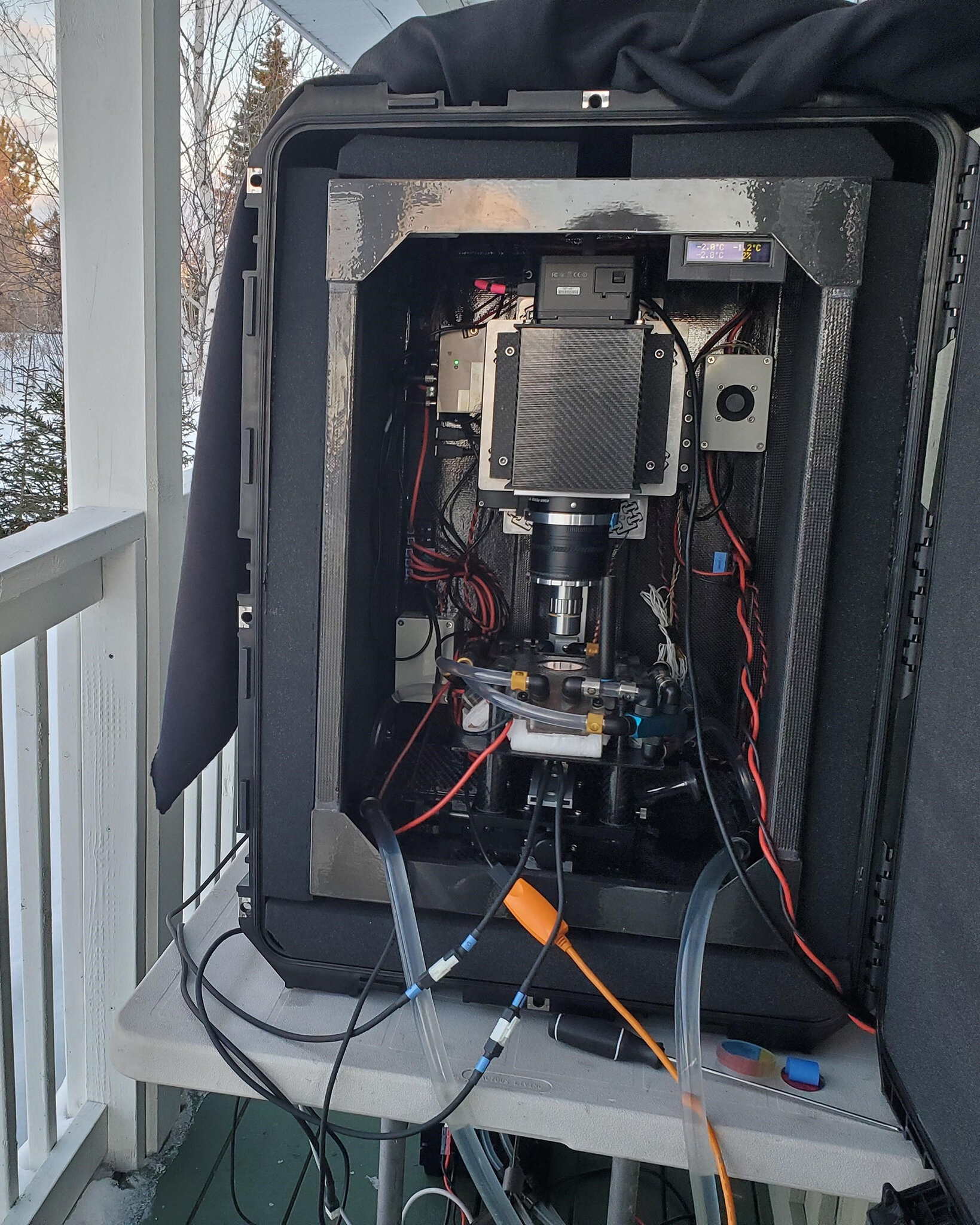 But these places were not cold enough. “Powder snow that a skier might like to ski through is, in fact, pretty much powder,” Dr. Myhrvold said. “There’s not a lot of beauty in those things.” Indeed, the snowflakes that fall on most people most of the time are rarely what people think of as snowflake-shaped. Water is a simple molecule consisting of two hydrogen atoms and one oxygen. When temperatures drop below 32 degrees Fahrenheit, the molecules start sticking to one another — that is, they freeze. A snowflake is born in a cloud when a water droplet freezes into a tiny ice crystal. The shape of the water molecules causes them to stack together in a hexagonal pattern. That is why the archetypical snowflake has six arms. Then the crystal grows, absorbing water vapor from the air and other droplets nearby evaporate to replenish the vapor. “It takes maybe 100,000 water droplets evaporating to make one snow crystal,” Dr. Libbrecht said. Video

When temperatures are just below freezing, the snowflakes are generally simple hexagon plates. At about 20 degrees Fahrenheit, the prevalent shape is hexagonal columns. It is between 15 degrees and -5 degrees Fahrenheit that the archetypically beautiful snowflakes usually form. At these temperatures, the points of the hexagon grow into branches. The branches then spawn other branches and smaller hexagonal plates. Slight variations in the temperature and humidity affect the growing pattern, and the conditions are constantly changing as the snowflake falls toward the ground. “Because it has this complicated path through the clouds, it gives a complicated shape,” Dr. Libbrecht said. “They’re all following different paths, and so each one looks a little different, depending on the path.” Thus, to find the beautiful snowflakes, Dr. Myhrvold went north, much farther north. He and a couple of assistants lugged about a thousand pounds of equipment to Fairbanks, Alaska; Yellowknife, the largest community in the Canadian Northwest Territories; and Timmins, Ontario, about 150 miles north of Lake Huron. A month later, the coronavirus pandemic put the endeavor on hiatus. But Dr. Myhrvold was able to take what he calls the highest resolution images of snowflakes ever. Image 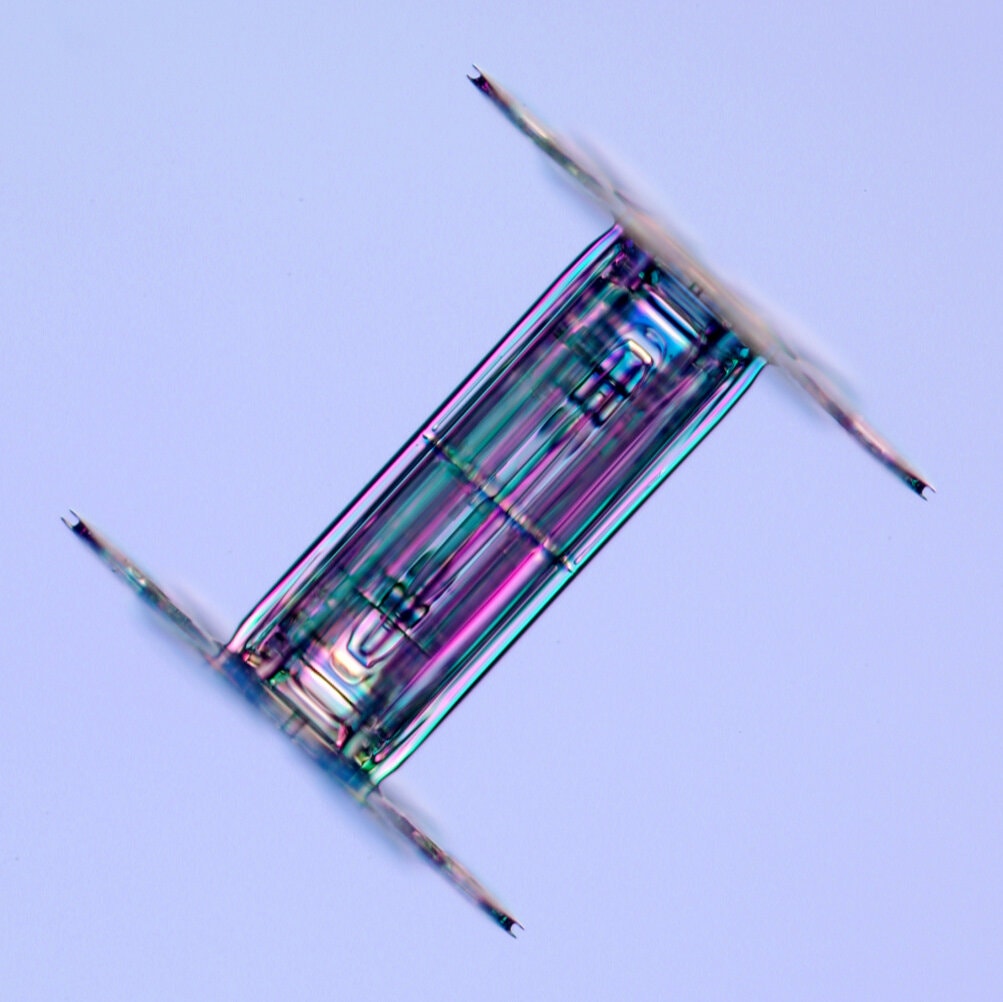 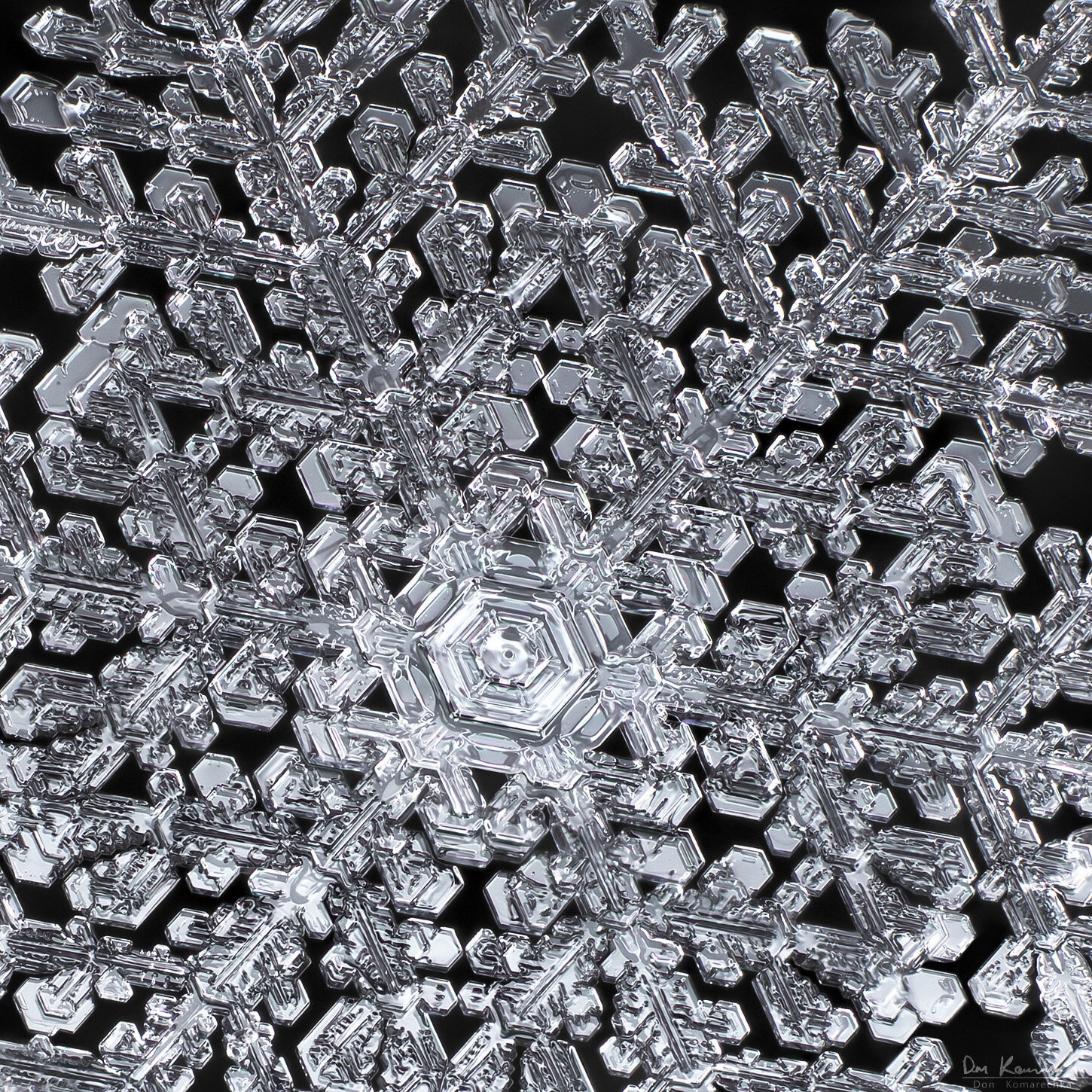 That claim has irked others in the snowflake world, including Don Komarechka, a Canadian photographer who takes a decidedly lower tech approach. He uses a store-bought digital camera with a high-power macro lens. He does not even use a tripod — he just holds the camera while the snowflakes sit on a black mitten that his grandmother had given him.“Incredibly simplistic,” Mr. Komarechka said. “It’s so approachable for anybody with any camera.” He said of Dr. Myhrvold’s custom-built system: “I think it’s a little over-engineered.” Mr. Komarechka also takes a different approach to illumination, using light reflected off a snowflake, while Dr. Myhrvold’s images capture light passing through. “You get to see surface texture, and sometimes beautiful rainbow colors in the center of a snowflake,” Mr. Komarechka said. The rainbow effect is the same as what you see in soap film, but the colors are “often much more solidly displayed than you would see in a soap film or anything else,” he said. “It’s almost psychedelic colors, almost looking like a tie-dye T-shirt.” To counter Dr. Myhrvold’s claims, Mr. Komarechka took an image that he says was even higher resolution. Dr. Myhrvold responded with a lengthy rebuttal explaining why his images were, nonetheless, more detailed. In practical terms, Dr. Myhrvold’s images are sharper when printed on paper at expansive sizes. They are available for purchase at sizes up to 2 meters by 1.5 meters. “In that very narrow sense, yep, that’s what Nathan is claiming, and he’s not wrong,” Mr. Komarechka said. Image